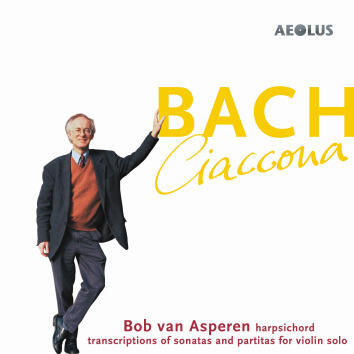 Transcriptions of sonatas and partitas for violin solo

Skowroneck harpsichord in the style of Dulcken, 1965

Even back in the age of Bach, the famous Sonatas and Partitas for violin solo were the subject of transciptions, particularly for keyboard instruments. We know that when Bach played these pieces on the keyboard “he added so much harmony as he deemed necessary.” Surviving transcriptions have been attributed to Bach himself as well as to his son Wilhelm Friedemann. These surviving transcriptions are interpreted by Bob van Asperen on this CD, supplemented by his own transcriptions for harpsichord.

Thus the Adagio, attributed to W. F. Bach, based on the first movement of the third violin sonata, receives here its longed-for continuation: the lacking three movements, including the magnificent fugue. And Bachs legendary Chaconne (originally titled “Ciaccona”) becomes a virtuoso show-piece for the famous harpsichord player.
Detailed background information on these works is provided in the CD-booklet by Bob van Asperen himself, as is a description of the harpsichord employed on this recording, the famous 1965 harpsichord by Martin Skowroneck, in the style of Johann Daniel Dulcken.