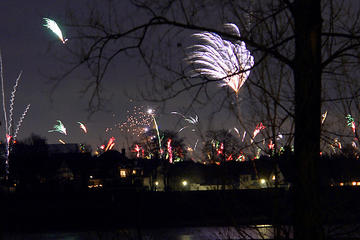 We're sending our best wishes for 2009 to all our customers, listeners and visitors - and use the opportunity to look back on 2008 and to what's coming up in 2009.

2008 was an absolutely important year for AEOLUS : studio and office have moved to new locations, the recording of the complete organ works of Bach with Ewald Kooiman has started, luxurious recording projects were carried out, important new releases like the CD with Wagner transcriptions , "Vergine Bella" with Il Desiderio and Arianna Savall or the Louis Couperin CD from London have been released, there was a Diapason d'Or for Cabanilles with Léon Berben, the new website had to stand the test and was filled more and more with content.

In 2009 a lot of interesting new CDs (and SACDs) are going to be released: Stephen Tharps sensational recording of the complete works by Jeanne Demessieux, the continuation of the Froberger and Louis Couperin editions performed on famous historical instruments with Bob van Asperen, English Consort songs with the Flanders Recorder Quartet and Amaryllis Dieltiens, baroque orchestra sounds of Agrell (Helsinki Baroque Orchestra) and Molter (Main Barockorchester Frankfurt), vocal music with Stimmwerck, the long time expected Clavichord recording of sonatas by Georg Bendas with Bernhard Klapprott, the Couperin Masses with Serge Schoonbroodt, more Karg-Elert..., and, if everything goes well, a box with the complete organ works of Bach in AEOLUS Surround sound by the end of 2009 ! We also invite you to join the AEOLUS forum which is available for discussions, wishes, criticism and plaudit round-the-clock!