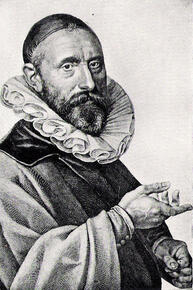 Jan Pieterszoon Sweelinck was a Dutch composer, organist, and pedagogue whose work straddled the end of the Renaissance and beginning of the Baroque eras.

Many of Jan Pieterszoon Sweelinck's family were musicians - principally organists. He was the elder son of Peter Swybbertszdon and Elske Sweeling, he adopted his mother's family name. The assertion that he studied in Venice with Zarlino, the famous composer and theorist, is not supported by surviving evidence. His only known teachers besides his father were Jacob Buyck, pastor at the Oude Kerk, Amsterdam, and Jan Willemszoon Lossy, a counter-tenor and shawm player at Haarlem, who taught him not organ but composition. By 1580, and possibly as early as 1577, he was organist at the Oude Kerk; his duties there were probably to provide an hour of music twice daily in the church. He became famous for his brilliant improvisations at the organ and harpsichord. From this time onward he left Amsterdam only to inspect new organs and advise on repairs and restorations.
As a teacher Jan Pieterszoon Sweelinck was influential and sought after, and his pupils were among the most highly regarded musicians of the time; they included Andreas Düben, Peter Hasse, Samuel Scheidt and Gottfried Scheidt, Paul Siefert, Ulrich Cernitz, Jacob Praetorius, and Johann Heinrich Scheidemann, founders of the so-called north German organ school of the 17th entury. He was known in Germany as the "maker of organists".
His over 70 survived keyboard works consist mainly of fantasias (Fantasia chromatica), echo fantasias, toccatas, and variations.
Jan Pieterszoon Sweelinck represents the highest development of the Dutch keyboard school, and indeed represented one of the highest pinnacles attained in keyboard contrapuntal complexity and refinement before J.S. Bach. However, he was a skilled composer for voices as well. Some of Sweelinck's innovations were of profound musical importance, including the fugue - he was the first to write an organ fugue which began simply, with one subject, successively adding texture and complexity until a final climax and resolution, an idea which was perfected at the end of the Baroque era by Bach. Stylistically Sweelinck's music also brings together the richness, complexity and spatial sense of the Gabrielis, with whom he was familiar from his time in Venice, and the ornamentation and intimate forms of the English keyboard composers. In formal development, especially in the use of countersubject, stretto, and organ point (pedal point), his music was far beyond the works of Frescobaldi - its nearest predecessor - and looks ahead to J.S. Bach.
Sweelinck was a master improviser, and acquired the informal title of the "Orpheus of Amsterdam." Many of his keyboard works may be similar to the improvisations that residents of Amsterdam around 1600 were likely to have heard. Even his vocal music, which is more conservative than his keyboard writing, shows a striking rhythmic complexity and an unusual richness of contrapuntal devices.
His influence was international: for example, some of his music appears in the Fitzwilliam Virginal Book, which otherwise mainly contains the work of English composers. Sweelinck wrote variations on John Dowland's internationally famous Lachrimae Pavan, and John Bull, the English keyboard composer, wrote a set of variations on a theme of Sweelinck, indicating the close connection between the different schools of composition across the English Channel.