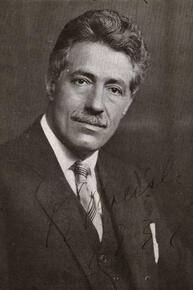 Fritz Kreisler was a violinist of legendary stature. He studied music in his native Vienna, and later in Paris with Bruckner, Hellmesberger, Delibes, Massart, Massenet and others. He won his first prize for violin at the Paris conservatory at the age of 12. A year later he undertook his first tour of the USA. It was the start of a very successful career which witnessed many highlights such as e.g. the creation in 1910 of Edward Elgar’s violin concerto.