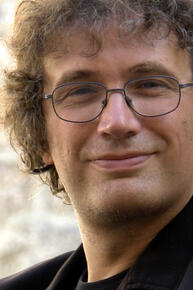 The internationally acclaimed composer, organist and improviser Thierry Escaich is a very prominent person in the contemporary music scene.

Considering the three facets of his art as bound together, he uses them to reflect his prolific inner world.

Born in 1965, Thierry Escaich was given enthusiastic recognition since 1990 for his early compositions such as his saxophone concerto “Le Chant des ténèbres” [The Song of Darkness] or “Ad ultimas laudes” for mixed choir. More prizes have followed, among others the “Victoires de la Musique” Composer of the Year award on two occasions, in 2003 and in 2006.

Today, his œuvre comprises about hundred pieces, charming the audience for their rejection of sterile experimentation, their hedonistic echo and their rhythmical fever.

His works have also been performed by the Philadelphia Orchestra, the Chicago Symphony Orchestra, the Berliner Konzerthaus, and the Orchestre Philharmonique de Radio France. Thierry Escaich has just finished a violin concerto dedicated to David Grimal and is currently writing a concerto for clarinet for Paul Meyer and a ballet for The New York City Ballet.

Although largely composing for his instrument (solo pieces, ensemble pieces, two concertos, “La Barque Solaire” for organ and orchestra), Thierry Escaich is open to all types of genres and forms, always investigating new sound universes. One will appreciate his very personal style and intimacy in works such as “Choral’s Dream” (2003) for piano and organ, or in the brief “Scènes de bal” for string quartet and even in vast frescos such as the “Chaconne” (2000) and “Vertiges de la croix” (2004) for orchestra, “Les Nuits hallucinées” [The Hallucinated Nights] for mezzo-soprano and orchestra (2008) and also in “Le Dernier Évangile” [The Last Gospel], an oratorio for double choir, organ and orchestra (1999).

Organist at the St-Étienne-du-Mont church (Paris) since 1997, where he succeeded to Marie-Madeleine and Maurice Duruflé, Thierry Escaich internationally tours as an organist. Wherever he plays, he is acclaimed for combining works from the repertoire with his own compositions and improvisations.

His passion for cinema has led him to improvise on the piano and the organ, and to compose for silent movies, as in his musical accompaniment of Frank Borzage’s “L’Heure suprême”, commissioned by the Louvre Museum in 1999.

Thierry Escaich has been professor for composition and improvisation at the National Conservatory in Paris since 1992.