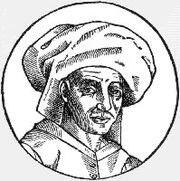 He is also known as Josquin Desprez, a French rendering of Dutch "Josken Van De Velde", diminutive of "Joseph Van De Velde", and Latinized as Josquinus Pratensis, alternatively Jodocus Pratensis. He was the most famous European composer between Guillaume Dufay and Palestrina, and is usually considered to be the central figure of the Franco-Flemish-School. Josquin is widely considered by music scholars to be the first master of the high Renaissance style of polyphonic vocal music that was emerging during his lifetime.