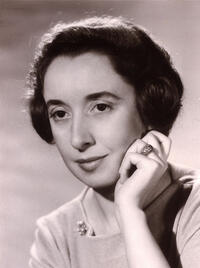 Jeanne Demessieux was one of the first female organists to take the new French school to America, performing there in 1953, then again in 1955 and 1958.

She was born on february 13, 1921 in Montpellier. Her family was musical. Jeanne’s interest in music was first awakened not by the organ, but by the violin. She began piano lessons with her sister Yolande at the age of three, composed her first pieces for piano at five, and joined the Montpellier conservatoire in 1928.
Jeanne moved to Paris in 1932 to further her piano studies under Lazare Lévy, who recommended her to Lélia Gousseau and supervised her studies with Simon Riera at the Paris conservatoire. She began accompanying services at the church of Saint-Esprit while still studying harmony, fugue, and composition at the conservatoire.
She met Marcel Dupré in 1936, and thereafter devoted herself almost exclusively to the organ and improvisation, winning First Prize in 1941.
Having won a number of awards, Jeanne seemed assured of a bright future, particularly as the German occupation meant that there was not much musical life in Paris and she thus had plenty of time – as much as eight or nine hours a day – to take her technique to new heights of perfection.
In 1946, all her hard work paid off with an outstanding series of concerts on the organ in the Salle Pleyel, where she performed her Six Etudes and improvised a symphony in four movements. This led to a further series of twelve legendary concerts up to 1948, at which she performed Bach’s six trio sonatas, great chorales, and all his toccatas, preludes, and fugues, several major works by her mentor Dupré and other contemporary composers, as well as great works by Mendelssohn, Liszt, and Franck.
After several series of recitals in France, England, Germany, and Holland, she became one of the first female organists to take the new French school to America, performing there in 1953, then again in 1955 and 1958 (the very first woman to do so, Renée Nizan, who performed in America as early as 1931-32, is today completely neglected). Jeanne was appointed titular organist for the magnificent Cavaillé-Coll instrument at La Madeleine in Paris in 1962, having previously recorded a superb performance of Franck’s complete works on the instrument, which won her the Grand Prix du Disque in 1960. She devoted much time to teaching, first at the conservatoire in Nancy in 1950, then in Liège from 1952. Jeanne Demessieux died from cancer on novmber 11, 1968.