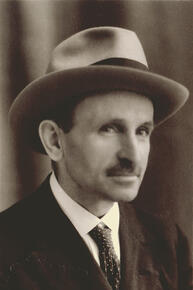 José María Beobide was born on November 25, 1882 in Zumaia, in the region of Guipuzkoa in Spain. He is the most significant figure in the town’s rich cultural heritage. His younger brother, Julio, also found fame as a sculptor. It is clear that this artistic background shaped his whole life, influencing his career and development as a composer. His love of music was encouraged by Don Antonio Trueba, organist at the parish church in Zumaia. Later, José María Beobide studied with Maestro Samaniego in Pamplona and then at the Madrid Conservatoire, where he was a student of Llanos, Grajal, Fontanilla, Rodoreda, and Brescia.

In 1900, when he was just eighteen, he came to the attention of the Order of Jesuits. The Jesuits recognised his gift for music and offered him a position as organist and music teacher in a school run by the order in Quito, the capital of Ecuador. He made rapid strides as a music teacher and the Ecuadorian authorities soon appointed him professor of aural training and piano at Ecuador’s national conservatoire, a post he held from 1902 to 1906.

He eventually resigned from these posts for health reasons. He suffered from ulcers and the mountain air in Quito did not suit him. He moved to the United States. During his time in New York, he was in contact with a number of publishing companies, which issued some of his compositions. As there was no sign of improvement in his health, he eventually returned to Zumaia. Once he had returned to full health there, he took up the post of organist at the Salesian college in Barakaldo. He was later appointed Professor at the Alfonso XII Royal College, run by the Augustinian fathers in the Escorial.

In around 1914, José María Beobide moved to Burgos to take up the post of organist and professor at the Jesuit college La Merced. In Burgos, he married Eloisa Varea Corral, daughter of a well-known Burgos family, on February 14, 1917. The couple had four children, Manuel, Matilde, Estibalíz, and María Aránzazu. During his time in Burgos, Beobide taught in the schools of the Circulo Católico de Obreros (Circle of Catholic Workers) and the Beneficencia Provincial (regional care homes), at the same time re-organising the Burgos choir and being nominated as its director. However, he turned down this post in favour of his favourite pupil, Antonio José. In 1930, he was also appointed director of music at the Casa de la Caridad (House of Charity).

That same year, he was appointed to a chair at teacher training college, choosing to take up a post in Pamplona, where he already taught organ classes at the Jesuit school. In Pamplona, José María Beobide’s teaching bore rich fruit. He specialised in folk music and early years music teaching.

In 1940, he was appointed Professor at the Academy of Music in Pamplona. The academy became a conservatoire in 1957 and José María Beobide eventually rose to the position of deputy director. During this period, he taught aural training, music aesthetics and history, transposition, and accompaniment. He was also deputy director of the Pamplona Music Society. At the society’s jubilee in 1959, Beobide was already 76 years old. In his declining years, he returned to Burgos, where he died in 1967.

In 1932, José María Beobide was appointed corresponding member of the San Fernando Royal Academy of Fine Arts. In 1940 he became a member of the Diego de Velásquez Institute, part of the council for academic research, and in 1941 he was appointed plenary speaker at the Institución Principe de Viana in Navarre. In 1948 he became a corresponding member of the Institución Fernán-Gonzales at the Burgos Academy of History and the Fine Arts. He was also awarded the Cross of Alfonso X el Sabio.