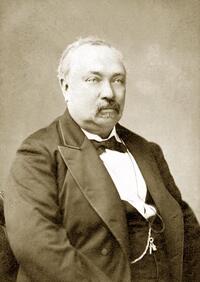 Edouard Batiste was born in Paris on the 28th of March. His father was a singer at the Opéra-Comique.
From 1828 on he studied at the Conservatoire de Paris, solfège (1st prize in 1833), harmony and accompaniment (1st prize in 1837), organ (class of François Benoist) and counterpoint and fugue (1st prize in 1839 in both classes).

In 1837 he started working as assistant-teacher of solfège, then as teacher for the Men's Choir (1840) at the Conservatoire de Paris. In 1840 he won the premier second Grand Prix de Rome and stayed at the Villa Medicis in Rome (1841). From 1842 mon he was organist of the Grand-Organ of the church of Saint-Nicolas-des-Champs in Paris. On the 1st of August 1854, the Parish Council of Saint-Eustache approved the nomination of Edouard Batiste as organist – the expert commission including, among others, the composers Auber and Niedermeyer, the Baron Taylor and the organists Benoist, Lefébure-Wély and Fessy. Batiste became the resident organist of the most beautiful « modern pipe organ » which had just left the Ducroquet manufactory and had a gigantic case designed by the architect Baltard.

Recognized as choir director and solfège professor, Batiste’s reputation grew significantly following his arrival at Saint-Eustache which was one of the most important musical centers in the french capital at the time.

During the Second Empire Batiste’s popularity was also due to the many other activities he was involved in: a renowned conductor he performed at numerous concerts. At the Conservatoire de Paris the musician was the director of the choir in addition to teaching several subjects for over 40 years – according to Fétis, Batiste taught over 5000 students. Batiste was also often invited to inaugurate organs and to participate as a member of the jury during choir competitions which became increasingly popular in Europe in the middle of the 19th century.

Batiste’s art is intimately linked to the Ducroquet organ of Saint-Eustache where he was the organist since 1854. For several years the musician played the largest organ in Paris (4 keyboards and 68 stops) before the intervention of Cavaillé-Coll on the organs of Saint-Sulpice (1862) and Notre-Dame de Paris (1868). The organ of Saint-Eustache is characterized by the combination of the tone-colors inherited from the 18th century and several new stops (harmonic stops, free-reed stops, Voix Céleste, Kéraulophone). The instrument was heavily damaged during the Commune (1871) and Batiste asked his friend Joseph Merklin to rebuild it. Batiste’s premature death in 1876 meant he never witnessed the inauguration of the new organ in 1877.