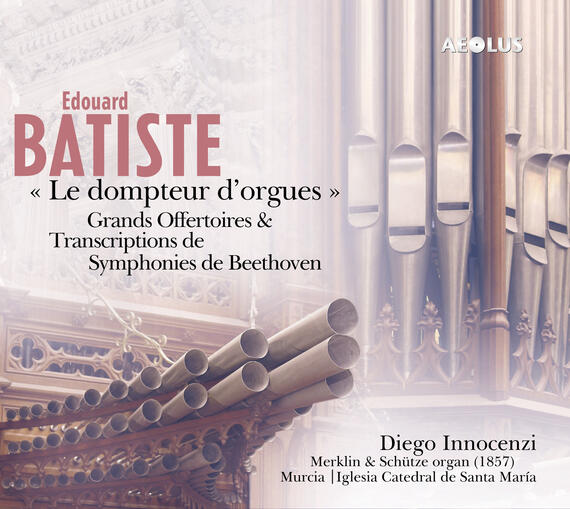 A bundle makes it possible to get a better price for a certain set of AEOLUS CDs.

You may have noticed that here on the AEOLUS website certain CDs and SACDs are displayed to be available as part of a "bundle". So what is a bundle? A bundle is a set of several complete AEOLUS CDs. In case you buy a bundle you pay significantly less than you would pay for the single CDs, but you get the exact same CDs, including original packaging and original booklet.

This way we created bundles e.g. for some of our composer series, e.g. Froberger, Maleingreau, etc. Please find here all bundles on offer.

Please note that these bundles are only available here on the AEOLUS website, not elsewhere.

Edouard Batiste who was called an "organ tamer" was one of the most famous french virtuosos in the 19th century. He worked as an advisor for the Merklin & Schütze organ company and inaugurated many of their new instruments. He himself was titular organist of Saint-Eustache in Paris and composed his organ music for the Ducroquet organ (1854) in that church.
When Diego Innocenzi came up with the idea of recording Edouard Batiste, we heard that the organ of Murcia cathedral, which had been unplayable for over 30 years, had just been restored. As this instrument is alomst contemporary to the Ducroquet organ, we decided to do our recordings here. And we were absolutely overwhealmed by the results : we have been able to realise exactly the registrations Batiste request for his music! The sound of this instrument is absolutely fantastic and impressive and the cathedral has wonderful acoustics.
Whereas SACD one contains big offertoires, communions and elevations, SACD presents transcriptions of movements from several Beethoven Symphonies!
Diego Innocenzi, titular organist of the Van den Heuvel organ of the Victoria Hall in Geneva, is well known to Aeolus' customers: he already performs on the two highly recommended albums with music for voice and organ by César Franck. His performances of Batiste music are absolutely stirring and convincing.
Don't miss this double album: beautiful unknown repertoire and a stunning instrument that has never been recorded before.

SACD - what does it mean?