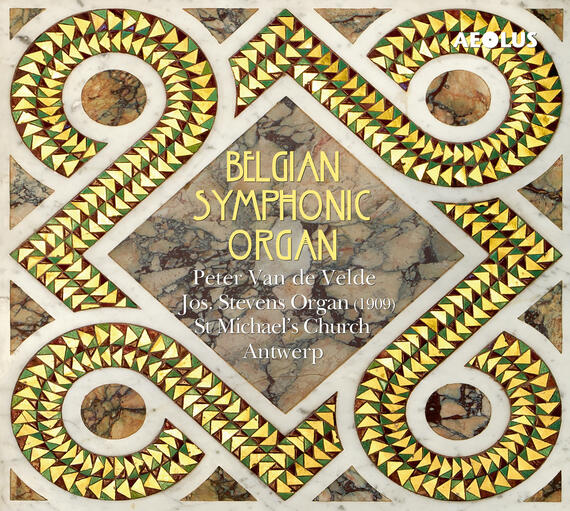 “May this surprising, beautifully designed CD with first-class organ playing by Peter Van de Velde, which again comes from the - rightly! - much-praised AEOLUS record label, be the prelude to a recording that shows us that in Belgium, too, the avant-garde has not been avoided in organ music.”
Mehr Details...

How well would organ lovers from across the border know our organ composers from around and into the 20th century? Presumably Hendrik Andriessen wins out in terms of familiarity, but what about names like Van Westering, Kee, Mudde, Van der Horst, Bijster, Zwart and Monnikendam, who was referred to as maitre during his lifetime in France?
But then you cast a glance at the names of the composers whose works can be heard on this CD, and then I ruefully admit that some of the names didn't mean anything to me.
Fortunately, then, we have Peter Van de Velde who introduces us to a lot unknown from our southern neighbours. And if you are not familiar with the organ of St Michael's in Antwerp, you will find that it is not only Antwerp Cathedral that has fine instruments.
Immediately upon listening to Camille-Marie Jacquemin's symphony, the thought bubbles up: 'Why didn't I hear this before?' Even without having read it in the booklet, my thoughts turned to the late Widor and Vierne. It turned out that the composer had been taught by the latter, and this work was also dedicated to the then organist of Notre-Dame. The second movement in particular would not have been out of place in one of Vierne's symphonies. And those beautiful jeux de fonds of the Stevens organ contribute to this.
Jacquemin did not grow old. He exchanged the organ bench for the pulpit after the Second World War. A priest on the organ bench from whom I would like to hear more musical meditations.
With Moulaert, we leave the French spheres for a bit. Belgium also has a German-speaking part and this music fits in well there. Not a choral alla Franck or Andriessen, but one that looks back to the German Baroque. The varied canon leans more towards Romanticism and allows the organist to present the organ in different facets to the listener. Van de Velde makes excellent use of these.
That organ lovers are less familiar with Joseph Jongen's younger brother is understandable. Despite his impressive record of musical service, he wrote only this 'in memoriam' for organ. It was composed on the occasion of the death of King Albert I of Belgium. Halfway through, the otherwise fascinating work sags a little, but as soon as march motifs appear and the opening of the Brabanconne resounds, you suddenly recognise his older brother's style. As if Joseph wanted to take him further down the road to an eventual open ending. That it remained with this one organ work is nevertheless regrettable.
We know this older brother. That is why we fully enjoy his Marche religieuse, which is slightly linked to Franck's Final, but also reminiscent of the later Marche by Nicholas Choveaux.
By Jean-Marie Plum, we hear his Trois Pièces. Not as sublime as Pierné's, but the lilting of the second movement and the virtuosity of the third show us that we are not dealing with a musical sourpuss.
Froidebise's meditation also exudes Franck's style, while Louanges is more reminiscent of his successor Tournemire. And although Froidebise must have been later influenced by Messiaen's oeuvre, this music still exudes the accessibility of late romanticism.
And - building on that - I wondered afterwards whether it wouldn't have been a good idea to also choose music that goes a bit more off the beaten track of that late romanticism. This could have made this CD a bit more exciting, because among those Dutch guys I mentioned at the beginning, there were plenty who dared to experiment, without going straight to barely comprehensible avant-garde music.
May this surprising, beautifully designed CD with first-class organ playing by Peter Van de Velde, which again comes from the - rightly! - much-praised AEOLUS record label, be the prelude to a recording that shows us that in Belgium, too, the avant-garde has not been avoided in organ music.

Please read the original disk review in dutch on the orgelnieuws website!

May this surprising, beautifully designed CD with first-class organ playing by Peter Van de Velde, which again comes from the - rightly! - much-praised AEOLUS record label, be the prelude to a recording that shows us that in Belgium, too, the avant-garde has not been avoided in organ music.
info2