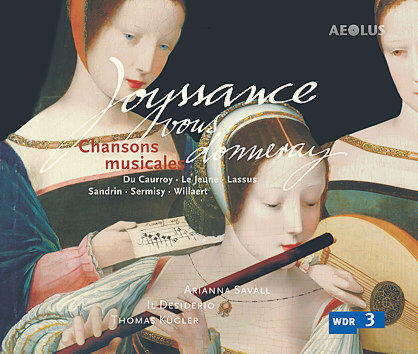 “The good spirits of these performers—their delight in the music— makes this enjoyable listening.”
Mehr Details...

Made in 2002, this release seems to be, so far as I know, the first venture by Arianna Savall beyond participation in the projects of her parents, Jordi Savall and Montserrat Figueras, and their AliaVox label. On this evidence, she would seem to have a lot to offer on her own.

This program follows many earlier examples of exploration into 16th Century French song and dance. Of the 27 selections (the last is simply a free improvisation by the players), ten are part-songs or polyphonic chansons, usually for four voices, by the likes of Sermisy, Anonymous, Lassus, Sandrin, Cadec, and Le Jeune, with the top part sung (usually by Savall) and the remaining parts played instrumentally. While I usually prefer such music done ail-vocally, there is ample contemporaneous justification for the approach here, which has the effect of reminding us how good the melodies are in so much of this material. Some of the songs are settings of the same texts by different composers (two of one, three of another). On the other hand, six of the songs are heard in characteristic instrumental elaborations of the day, with the vocal originals also included for perspective. And there is a nice group of three Gervaise dances to enliven the party.

All this material is both pleasant and fascinating, as well as intelligently assembled and explained. My reservations result from the resources brought to bear. There are seven players variously involved: no less than five on early flutes (led by Kiigler), plus one on "muted cornet", one on lute, and one on bass viol. Savall herself pitches in on harp, while one of the recorder players is also a mezzo-soprano vocalist (who really sounds like a countertenor!).
Savall's voice has something of the same steely hardness of her mother's, but she is expert and plainly committed. If there is rather a lot of her voice for some tastes, there is also an excess of flute and a thinness of instrumental textures that makes one long for more varied sounds. But in the end, the good spirits of these performers—their delight in the music— makes this enjoyable listening.
Texts and translations included.

The good spirits of these performers—their delight in the music— makes this enjoyable listening.
info2