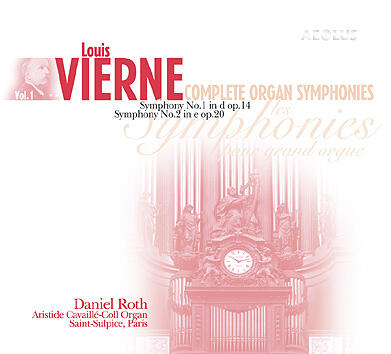 “Here is a master organist, tackling two of the masterpieces of the organ literature. Highly recommended ”
Mehr Details...

Listening to the organ works of Louis Vierne reminds me of the challenge of trying to capture dynamite in a bottle. Vierne has written music that can be explosive, almost larger than life. It takes every pipe of the mighty organ of Saint-Sulpice in Paris to capture the sound that emerged from Vierne's imagination. Even in a recording as fine as this, we can only approximate the impact of these thunderous sounds echoing through the cathedral's expanse, rattling the windows, shaking the walls.
Daniel Roth provides a welcome addition to the catalog. Here is a master organist, tackling two of the masterpieces of the organ literature. One sits back, reveling in the tonal splendor. In the first symphony, Roth allows Vierne's menacing opening movement to build to a massive climax (although both Marie-Clare Alain and Daniel Chorzempa are slightly more menacing in this music). Roth's second-movement Fugue builds to a magnificent conclusion. The third-movement Pastorale is appropriately peaceful while his Allegro vivace is fleet and electric and the fifth-movement Andante is nicely meditative. In the Final, Roth literally lets out all the stops. We close our eyes and almost imagine sitting in Saint-Sulpice, the sound sweeping over us. In my rational moments, I realized that there was a slightly excessive reverberation that somewhat mars this movement. Yet, in the end, this did not matter. In his recording, Gunther Kaunzinger provides extra drama, aided by his quick tempos. (His recording of this symphony is 10 minutes shorter than Roth). But Roth brilliantly plays this amazing music.
If anything, Roth is even more impressive in the Second Symphony, which was composed in 1902, four years after the First Symphony. We can sense how, in those four years, Vierne had gained in maturity. Roth builds the second movement Choral to a mighty climax and then transports us with songlike flutes in the third movement Scherzo. We feel the flowing of melodic currents throughout the fourth-movement Cantabile, leading into the mighty Final. I really like Larry's recording of this symphony. At the same time, it is hard not to be caught up by Kanzinger's faster tempos and more intense approach. But overall, Roth won me over.
The booklet contains excellent notes by Richard Corser. I look forward to additional volumes in this series. Highly recommended. John E. Roos

“This disc is an unmitigated joy from beginning to end.”
Mehr Details...

This disc is an unmitigated joy from beginning to end. The Clicquot/Cavaille-Coll organ in Saint-Sulpice, Paris, is without doubt one of the most characterful and musical instruments anywhere in the world - with whole-hearted flutes harmoniques, zesty strings and a wonderfully rich and full fortissimo that can only compare to going flat out along the motorway in a vintage Bentley Daniel Roth is in superb form throughout and makes both these works sound anew.

“I have some of these organ symphonies in binaural recordings on standard CDs, but the hi-res 5-channel surround on this SACD clearly surpasses even the added spatial recreation of those recordings on headphones. ”
Mehr Details...

This is the first volume of a proposed SACD series of all six organ symphonies by the last of the great romantic organist-composers of the last 19th and early 20th centuries in France.

Vierne carried the development of the organ symphony even further than his predecessors Franck and Widor had done. No other composer since has developed this style imitating the symphony orchestra any further; Messiaen went in an entirely different direction. Part of Vierne’s advancements were due to the variety of possibilities offered him by the complex Cavaillé-Coll pipe organs designed for this type of music in the second half of the 19th century. (The Registration/Composition of this particular organ - dating originally from 1862 - is listed in the back of the note booklet.)

Even though Vierne was almost blind most of his life, his earlier years were happy for him. He started on his Symphony No. 1 in 1898 and was married the next year in Saint-Sulpice. The work shows the strong influence of his teacher Widor, but Vierne inserts more chromaticism in some passages than found in Widor’s organ symphonies. The general feeling of the work is more of a suite than a symphony, and all with an optimistic tenor. The work’s Finale changes from D minor to Major and is one of his most-played pieces - excellent for church postludes. Its main theme appears in the pedals.

The Second Symphony is in some ways less free and improvisatory than the First, and makes use of Franck’s cyclic structure. The first movement is in pure sonata-allegro form. The work’s Choral movement is very similar to a Choral movement in Widor’s Symphony No. 7. It is followed by Scherzo and Cantabile movements, and the work closes with an E Major Final, which extensively develops two main themes.

Daniel Roth is a superb organist and Aeolus has perfectly captured in hi-res surround the rich sounds conjured up between Vierne’s works and the magnificent pipe organ in this historic space. I have some of these organ symphonies in binaural recordings on standard CDs, but the hi-res 5-channel surround on this SACD clearly surpasses even the added spatial recreation of those recordings on headphones.

Here is a master organist, tackling two of the masterpieces of the organ literature. Highly recommended

This disc is an unmitigated joy from beginning to end.

I have some of these organ symphonies in binaural recordings on standard CDs, but the hi-res 5-channel surround on this SACD clearly surpasses even the added spatial recreation of those recordings on headphones. 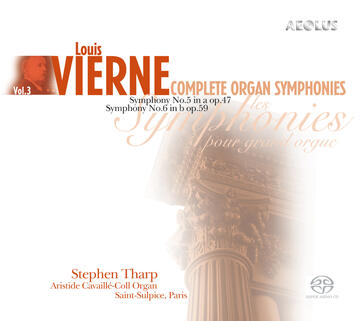